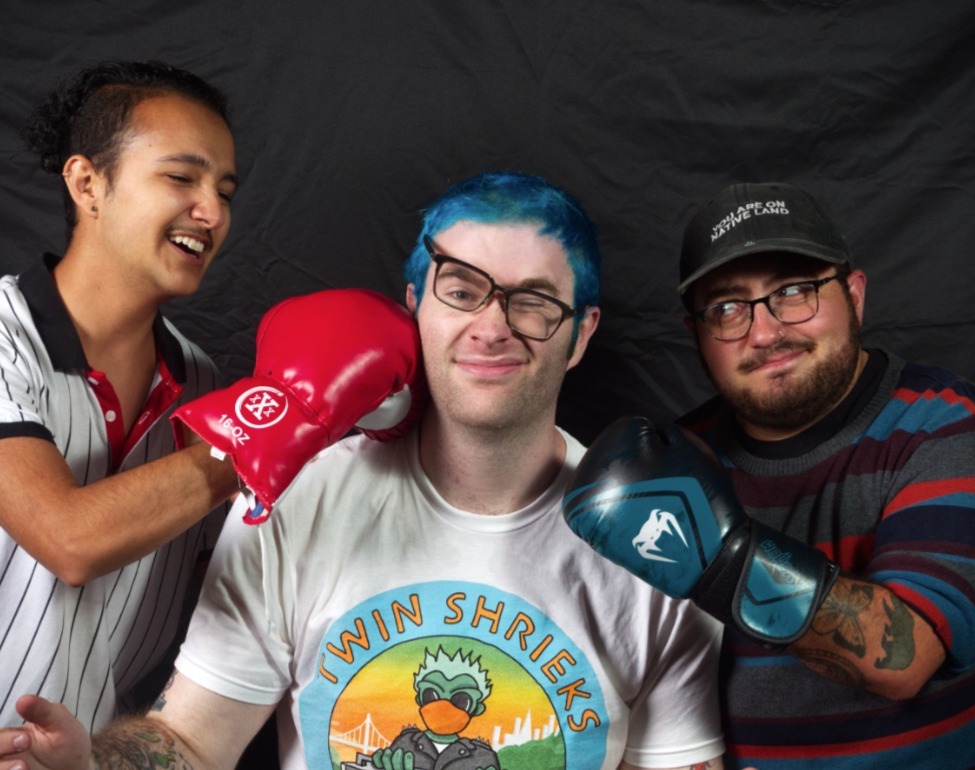 Earlier this year, East Bay pop punks Sarchasm announced that after twelve years of releasing nothing but certified bangers, they were calling it quits and we felt personally attacked by this. In that same announcement, they also said that they would be releasing one final album, which we’d like to think they did in an attempt to help soften the blow. Well, it worked….kinda. Conditional Love is out today and while we’re still not 100% healed from the near pain they’ve inflicted upon us, we do feel slightly better because it’s such an incredible album. We decided that the only thing that could provide the closure we needed to fully remedy our sorrow was to speak with the band themselves. So, we rang up the tremendous trio of Alex (bass/vocals), Stevie (drums/vocals) and Mateo (guitar/vocals) and had them talk us off the ledge.

Dying Scene: How did you decide that Conditional Love would be your final album? Was it an actual decision that you made as a group or was it more of an organic process (obligations to work, family, etc)?

Mateo: It was a mix of both. The decision to end the band and the decision to record one final album came about over a series of conversations in late 2021 and early 2022.

Stevie: Mateo was no longer in a place where he could tour and do as much stuff, and Alex and I wanted to continue actively touring, and it didn’t feel right to keep doing Sarchasm without Mateo.

Alex: I touched on this in a post, but I’ve admired bands like REM who were able to walk away cordially and in a way that felt meaningful. We reached that point, and I’m happy we were able to send it off with something we felt proud of.

DS: I know that you all have been playing since your mid-teens. Are you thinking it’s now time for a little break or will there be other projects you’re going to start either together or individually?

Stevie: Excuse me, I was a tween! (Stevie was 11). Nevertheless, I’m going to continue playing with my band Crush Material, and occasionally I have a solo project called Pool Jock that I’ve been recording an album with Mateo since 2020. One day it will come out I hope! Perhaps in 2023 but we shall see.

Alex: Stevie and I, along with Amy (our second guitarist) and Becket (Mateo’s summer tour stand-in) started a new band called STARTLE!, and Stevie and I are also continuing to be active with 924 Gilman.

Mateo: I plan to continue to make music, and I know this isn’t our last time playing onstage together, even if Sarchasm the band is not continuing. I’m also still active as a recording engineer, which I guess is also a scene-related jam.

DS: What are your biggest takeaways from the past decade+ playing with Sarchasm?

Alex: I think I used to worry I wasn’t doing the right things to make us popular or mesh with the East Bay scene, but the longer we did it the more it felt best to embrace your own oddities and how you operate musically. Make sure you’re doing it for yourself, above everything. Don’t just force yourself to do a thing just because it feels like that’s what you’re supposed to do or what’s expected of you.

DS: Conditional Love sounds like it was produced with a theme of closure in mind. Was that intentional or are we just being extra emo and reading too much into it?

All: It was absolutely intentional. We knew that Conditional Love was going to be a last album in some fashion – whether before a long break between releases or the band’s swansong. Once we made the decision to end the band in 2022, we decided to lean all the way into the album’s theme of endings and new beginnings. We also all graduated college and went through a lot of change since our previous album, so there was closure in a lot of life elements happening around us. But maybe writing an album centered around your band ending is the most emo move.

DS: In 2021 you released They Might Be Covers was a pretty awesome lil album, covering a bunch of fantastic They Might Be Giants tunes. Was that a side effect of ‘Pandemic Boredom’ or was it something you had thought of doing for awhile? How did that group discussion go?

Alex: Shannon from awakebutstillinbed and I were on tour together, and we both realized that we have a deep love and appreciation for the band They Might Be Giants. The original plan was to do a They Might Be Giants cover set with Shannon guesting at Fest 2020, but the pandemic obviously had other plans. It felt like a fun way to collaborate with another musician and friend from the scene. Plus, one of our favorite things as a band to do is play covers, so it was a no-brainer. They Might Be Giants has been one of my biggest musical influences, and I would encourage anyone when given the chance to attempt to do a cover set or something like this with one of your favorite bands. It really makes you appreciate their music on a totally different level. Nothing like the realization that TMBG songs are relentlessly complex to ground you in your abilities!

DS: You describe yourselves as “Anxious indie punk”. Was that the sound you were aiming for when starting the band or is that just how it turned out?

Stevie: We kinda just fell into the label anxious indie punk. For a while we didn’t really feel like we fit into any genre option we’d been provided, particularly pop punk which is what we’ve gotten labeled as most frequently over the years.

Alex: I think we all came from different musical backgrounds. I didn’t find bands like MCR or the Warped Tour acts that other 2010s East Bay groups would have been listening to and instead came into Sarchasm obsessed with new wave acts like Talking Heads and Elvis Costello. Stevie and Mateo each had their own separate tastes from me, and the blending never created something that felt typical to “pop punk” despite our collective Green Day love. Indie punk just made more sense to us with our sound and who we are as people.

DS: You’ve listed Talking Heads, the aforementioned Green Day and Rancid as bands who have influenced the band but what about lesser known/local bands. Any of those smaller bands provide inspiration through the years?

All: Smaller local bands have always provided just as much inspiration to us as the big heads (including the Talking ones), both in a community inspiration sense as well as a musical sense. There are too many to list; so a small sample is: Waterfly Spigot, Pseudo, Local Hero, CAMPY, Under 15 Seconds, The Matches, Jabber, Corrupt Vision, Polkadot, Worriers, Like Roses, Grumpster, the Lookout Records back catalog, the Asian Man Records back catalog…

DS: If you could change/improve one thing about the punk scene, what would it be?

DS: Stevie, I was reading another interview where you said you had done some time as a “Quaker Bouncer” when you were in PA but there were nowhere near enough deets given in that article. Spill!!

Stevie: Oh wow, what a throwback! I went to a Quaker college in PA called Haverford College for two years, and they had a thing where people could host parties with alcohol on campus so long as they had a “Quaker bouncer” who basically made sure no one got too sick or hurt. I’m pretty sure I did one shift of being a Quaker bouncer and then never did it again, so that’s pretty funny that I had mentioned that in an interview…

DS: Now that you are hanging it up, give us a few bands we can listen to to get our ‘Sarchasm Fix’.

All: Teenage Halloween, Like Roses, Little Low, Grumpster, Sweet Gloom, can we say STARTLE? Is that allowed? Play Mountain Goats on one speaker and Green Day at the same time. That might do it.

DS: And now, the most important question – When will Conditional Love be available on vinyl?????

That we will, comrades. That we will. And we suggest you buy the album as well, dear reader (even if not on vinyl) because it is definitely an AoTY contender. Still don’t believe us? Stream it below and try to tell us we’re wrong! 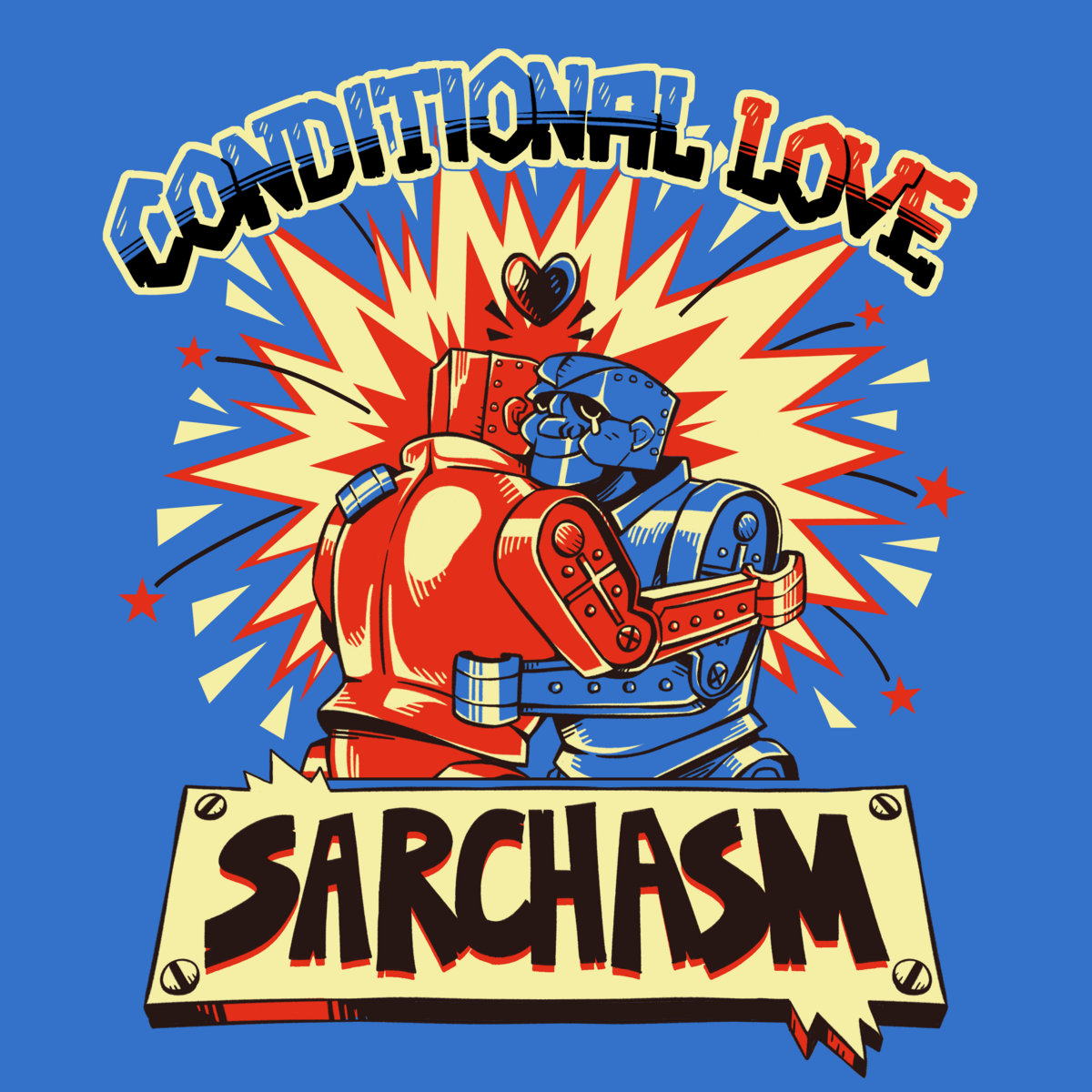 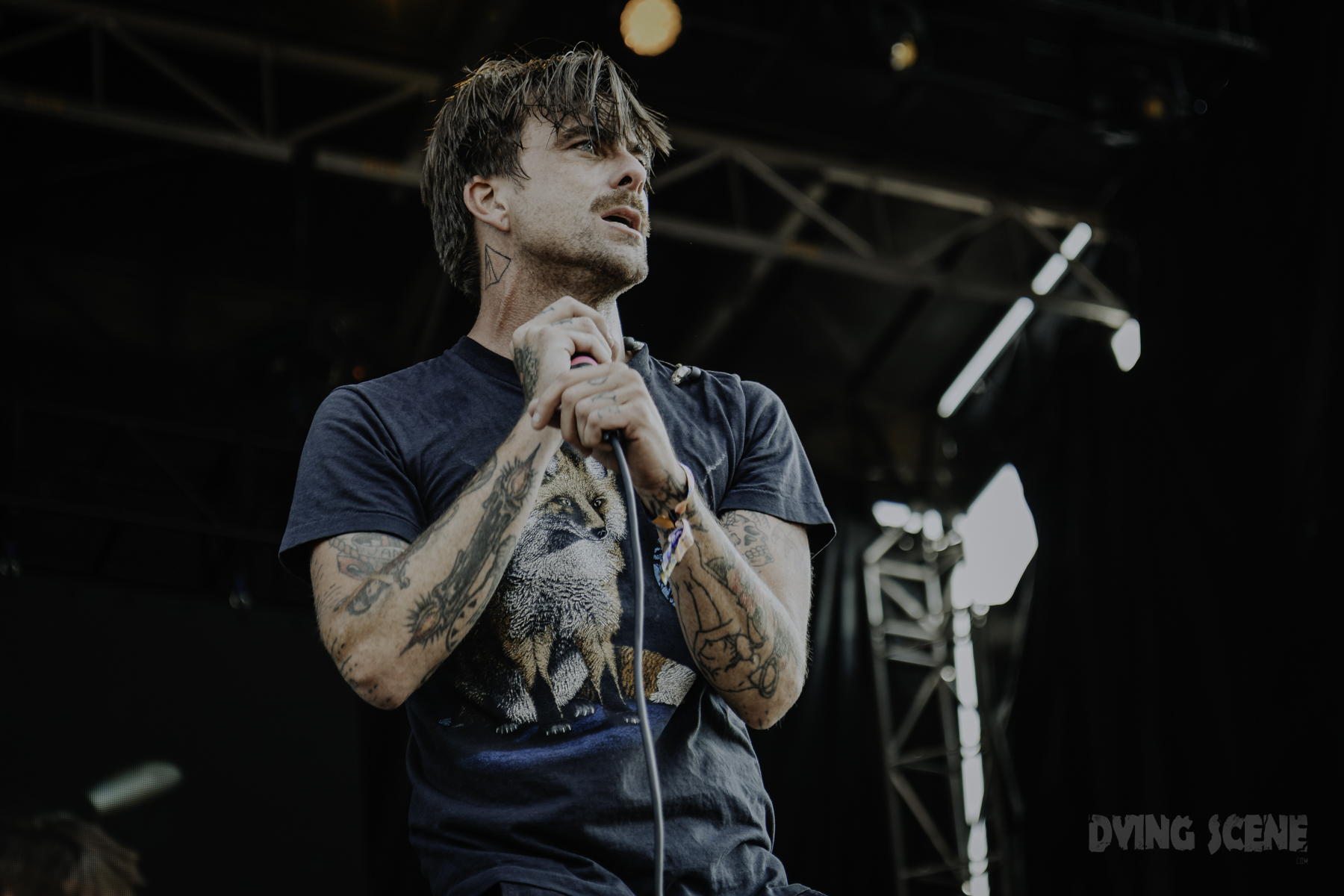 Did you miss Riot Fest this year? Or want to relive those last days of summer seeing your favorite bands? Good news! Fellow Dying Scene contributor Meredith Goldberg and I have all the photos you’ll need of the three-day music festival held in Chicago from September 16-18th, 2022. We are recapping some of the bands […] 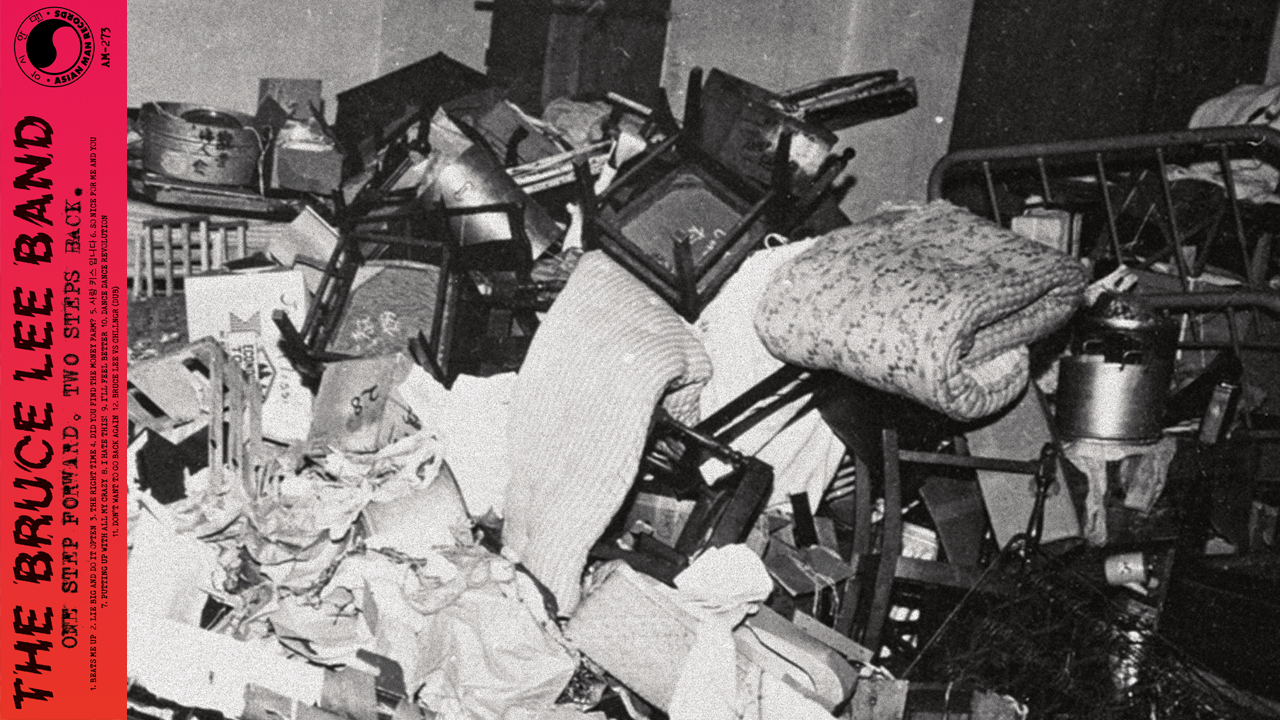 When I think of ska, one of the first names that comes to mind is Mike Park. You might know him as the founder of an iconic label called Asian Man Records; a venture he has operated out of his mom’s garage for over 25 years, helping break bands like Alkaline Trio, Less Than Jake, […] 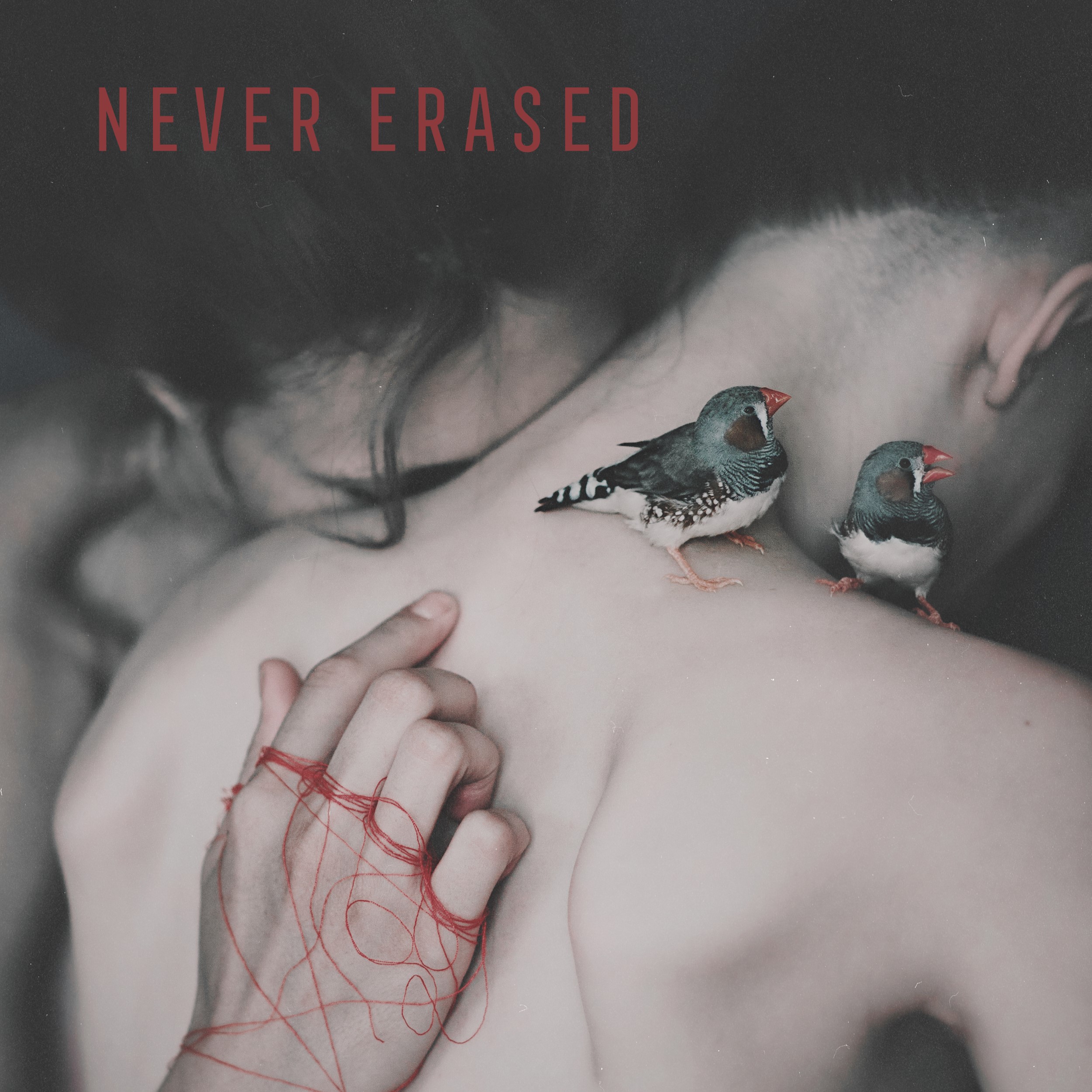 Even though we weren’t up and running for most of the month of June, we still wanted to make sure we acknowledged PRIDE Month and what better way to do that than with the first ‘Post-Resurrection’ DS Exclusive Stream! This kick ass comp consists of LGBTQIA artists from across the musical spectrum and will be […]