Rhode Island is a little bit different from the rest of the United States. Nothing is further than 20 minutes away by car. Prostitution is still legal. And last weekend, Four Year Strong played to a crowd of 100 kids, while the security at the show was the staff of a college radio station. It wasn’t what I expected, but it was 10 times more fun.

After the show, I caught up with guitarist and vocalist Dan O’Connor from FYS (pictured <<< there). Aside from having enviable facial hair, he is a super nice dude and we talked about comic books, touring, and his love/hate relationship with Denver shows – read the interview here!

Thank you to Dan and to the following people for helping me interview & photograph one of my favorite bands: Mara Frankel from I Surrender Records, Kelly Ahern from WQRI, FYS tour manager Josh Lovell, and the DyingScene editor-in-chief Dave, who continues to let me risk ruining his good name and the site’s reputation. And my girlfriend, Ania, without whom I would not have been in RI in the first place.

Dying Scene: So first off, what’s a question that you don’t want to get asked?

Dan O’Connor: That would be, “where does the band name come from?” – it’s on Wikipedia.

DS: You guys just finished up a huge tour with Every Time I Die, Polar Bear Club, and Trapped Under Ice – what was the best part about touring with those bands? 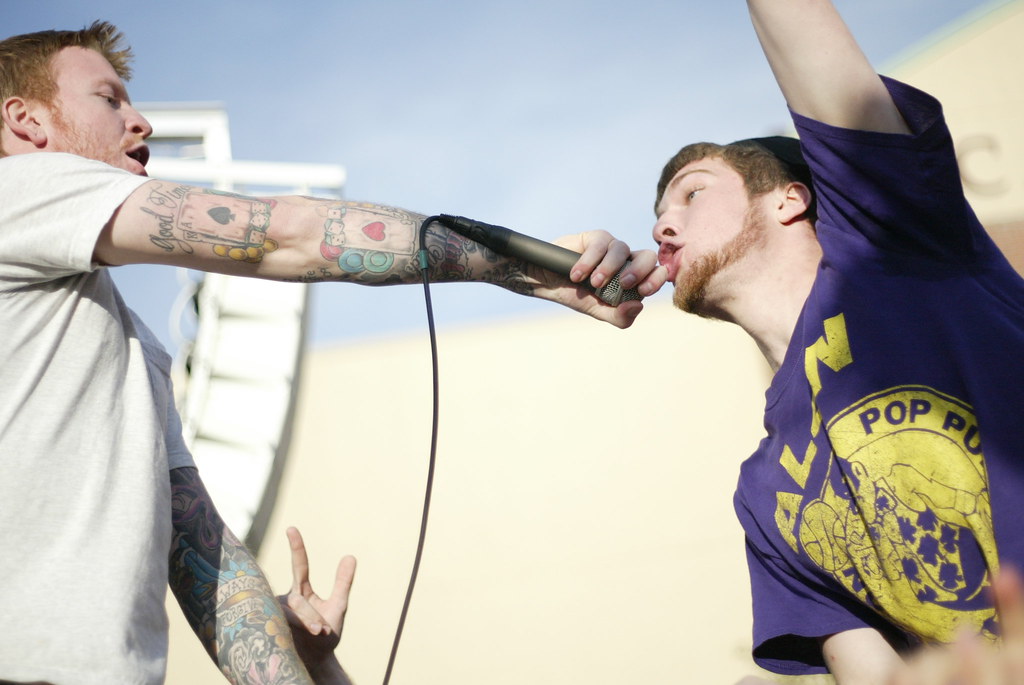 DO: The best part was every single day, getting to watch three insanely awesome bands. Every tour you do, there’s always one or two bands that you look forward to watching every day – but you only watch your favorite band on the tour maybe half of the nights. I watched every band on that tour, every single night. Every night, their sets were just insanely awesome. I actually played with Polar Bear Club for the last week and a half because Goose got his knee broken.

DS: That was actually my next question – what happened to Goose?!

DO: I didn’t see it, but the story goes that he was dancing on a bench, and someone else sitting near the bench punched him in the knee, and it just shattered his knee. So he had to go home and have surgery. Alan and myself learned Polar Bear Club’s set on bass and we played with them.
From what I hear he’s doing better now. He had the surgery; it’s still kind of like a slow recovery thing. He’s playing the one-off shows with them right now. And they’re doing Warped Tour with us, so we’re stoked on that.

DS: Are there any cities or venues you guys like to play on tour?

DO: I love playing the northeast, especially because tour-wise it’s got the easiest drives. But I look forward to different things about different places. There’s always things you look forward to and things you don’t  – like when you go to Florida it’s humid as hell, you go to Seattle and it’s usually rainy and cold. One of my least favorite places to play, not because of the shows, is in Denver area – the air is so thin that it’s hard to jump around and have enough energy to sing. But Denver shows are insane, so I’ll deal with it.

DS: So how do you guys use your time on tour when you’re not performing?

DO: We do different stuff all the time. We just hang around and enjoy each others’ company a lot of the time. Alan and I like to write on tour sometimes. We read a lot. There’s a book I’m reading now that I really like called Spraypaint on the Wall, it’s a Black Flag book. They interviewed everybody who ever had anything to do with the band – the band, their crew. The book’s like this thick [about 3 inches]. I’m also really into comic books, so I read those a lot on tour. 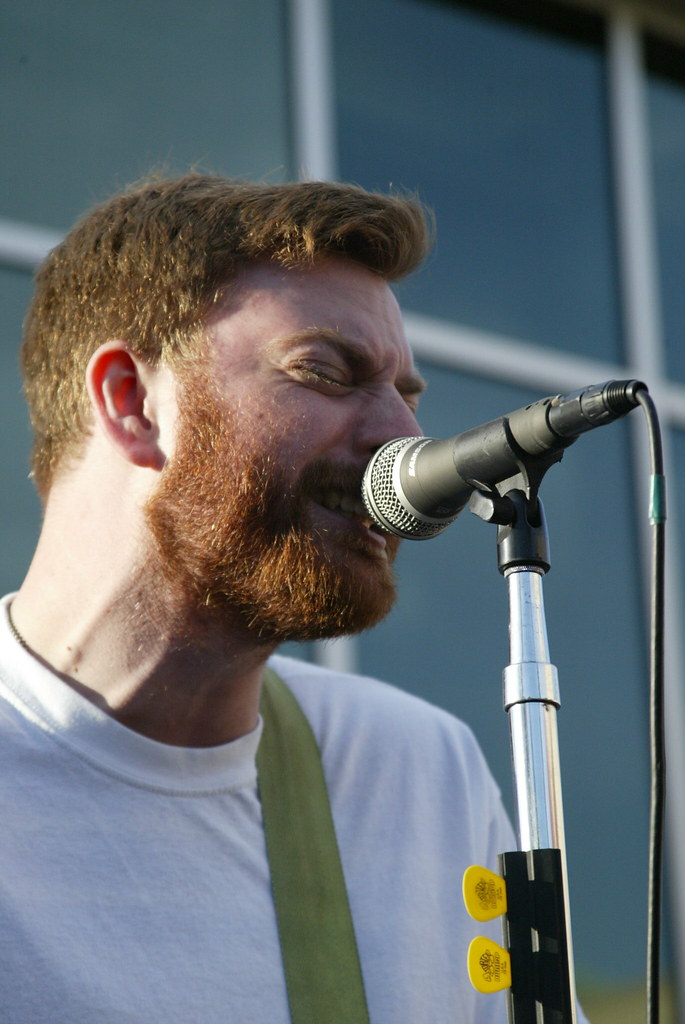 DO: I’m reading Y: The Last Man, that’s really cool. I just finished the Boys series a little while ago and Just A Pligrim. I really like Garth Ennis a lot.

DS: Has the Enemy of Europe tour been affected at all by the volcano eruption?

DO: As of right now, no – we haven’t had any problems or cancelations or anything. There’s still problems with airlines, but we’ll see what happens when we fly out.

DS: What are you guys looking forward to most about touring with the Wonder Years and Fireworks?

DO: We just played with The Wonder Years a not too long ago. We’ve only met them a few times but they seem like really, really great guys. The Fireworks guys, we’ve been able to tour with numerous times and they are some of the best dudes. They are some of the funniest – the things that they do on tour, it’s entertainment all the time. And they’re a great, great band – I love watching them play. They’re some of our best friends, so we’re really excited to be hanging out with our buddies.

DS: You guys are playing all of Warped Tour this summer – what are you looking forward to most and least about that?

DO: What I’m looking forward to least is the heat, and not being able to escape it. Other than that, I love Warped Tour! It’s so much fun. I know every band that goes on Warped Tour says this, but it really is like summer camp when you’re a kid. It’s awesome, there’s so many friends. Especially this year – Every Time I Die, Set Your Goals, Polar Bear Club. We’re friends with other bands too, like Mayday Parade, Pierce The Veil, Bring Me The Horizon. And I’m looking forward to making new friends. It’s a great, great time – and the food’s awesome.

DS: You and Alan are straight-edge, is anybody else in the band?

DO: Nope. Just us. Our merch guy and our tour manager are, as well.

DS: Does ever cause conflicts between you guys?

DO: Nope. We all respect each other, it’s as simple as that. What they choose to do is their business, just as what I choose to do is my business. I have no problems with the choices people make.

DS: Are there any bands coming up in Massachusetts that you want to give some ups to?

DO: We always back our friends A Loss For Words – they’re coming up right now, they’re awesome.

DS: You and Alan are on their new cover album, right?

DO: Yeah! Matty called us up, and he asked us if we wanted to sing on the song [“I Want You Back”], and we said yeah, sure! We love those guys like brothers and we’ve been friends with them forever, so we were definitely stoked to sing on it. It comes out May 11. 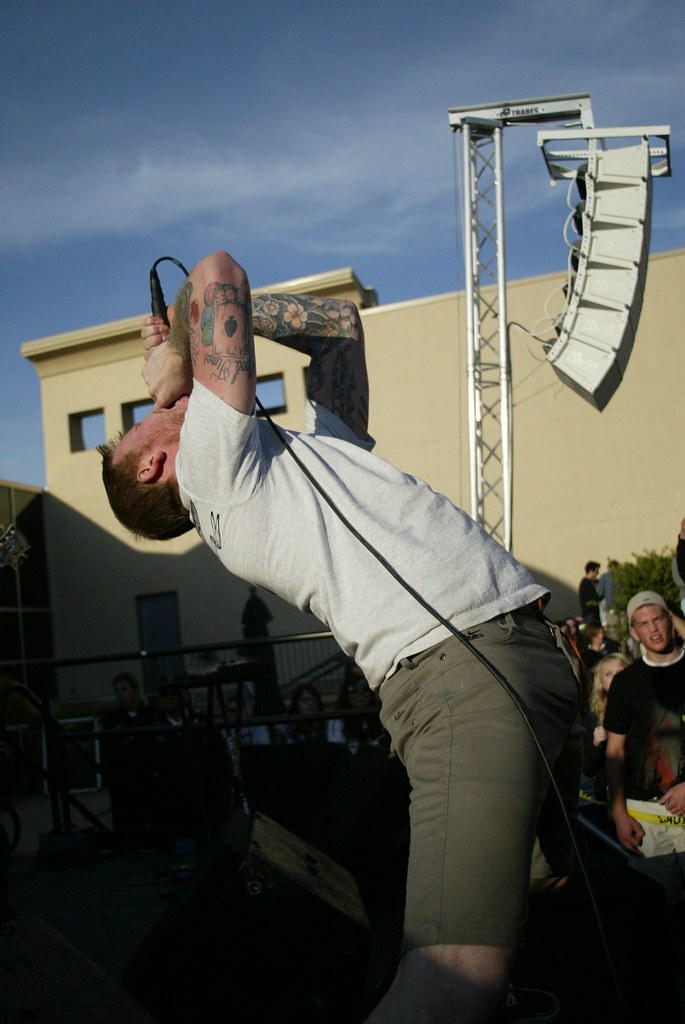 DS: What’s the song-writing process like for you guys?

DO: We don’t write a ton on the road, because it’s so easy to get distracted. But Alan and I will get together and just jam out on the guitars for a little while. We’ll write all the music to a song and then the vocals afterward. Then we take them to the band, and everybody tweaks their parts. That’s pretty much the way we’ve always done things.
We did a lot more jamming together as a band on Enemy Of The World then we had in the past. Rise Or Die Trying was pretty much all the first way, and on Enemy Of The World it was about half us jamming it out together.

DS: You guys worked with Machine, who’s a producer, on Enemy Of The World and Explains It All – was he a songwriting influence or did he focus on getting the best sound from you guys?

DO: He pushed us a lot. We still wrote everything ourselves, but we’d play part of a song for him, and he wouldn’t say, “Do this here instead” – it was more like “Does this sound right?” or “Is this Four Year Strong enough?” That was kind of his thing, he just pushed us to take Four Year Strong to the next level, to really hone in on what we sounded like.
When we did Rise Or Die Trying, there were songs that we’d written over a long, long period of time and so when it came time to write a whole batch of new songs, it was kind of like “What do we even sound like anymore?” So he kept us on track – we’d write something and he’d say “That’s good – how can we twist it, make it more Four Year Strong?” We became a tighter unit, for sure.

DS: One change in your sound from Rise Or Die Trying is that you use fewer moving vocal harmonies between you and Alan – is that because you wanted to sound less like Panic! At The Disco?

DO: No, but we wanted to make sure this record really hit hard, and we didn’t want to wash it out with too many harmonies. We still harmonized, but we wanted to make sure that it was in places that really needed it. So there are a lot more background vocals, but some of the leads we left alone so that that had more of a harsher, live vibe. People have told me, “Oh, I love your record but I didn’t expect you to sound like this live” and we keep striving to get our live sound on our records. It never really comes across, so we decided on this record to try and tone down the harmonies and keep them a little bit lower in the mix to get that sound

DS: What cover song has been the most fun to arrange and play?

DO: The funnest to arrange would either be Ironic or Bullet With Butterfly Wings. Ironic, because it was just such a weird song for us to do and we kind of dove into it laughing at ourselves already. It was really fun to do that song because we never really do slower, prettier parts. Trying to pull those off with also trying to have an up-beat chorus was really, really fun to try to accomplish. I really liked doing Bullet because we don’t get to do darker stuff like that, and really mess around with noisy guitar and different effects, so that was a fun song to do.

DS: You’ve had some guys from Bury Your Dead, Every Time I Die, Reign Supreme, and bunch more great bands on your past albums – if you could pick anyone to guest on your next album, who would it be? 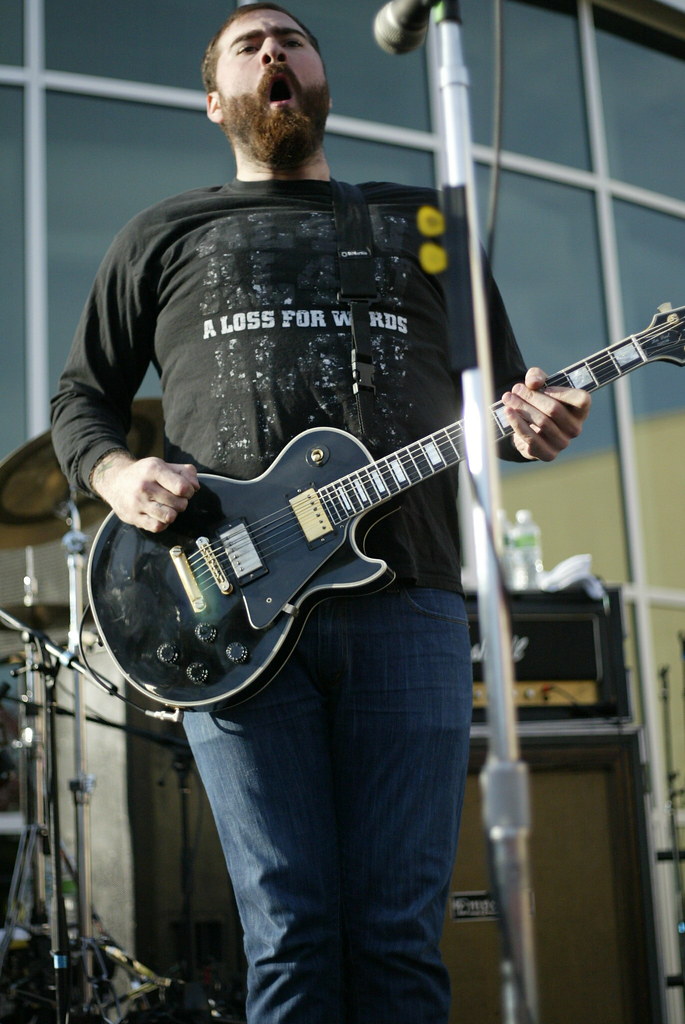 DS: What’s one question you always want to get asked but never hear?

DS: What are you guys doing after Warped Tour? There was about 2.5 years between Rise Or Die Trying and Enemy Of The World and you guys were on the road for a lot of that. Are you guys just going to be on tour until the end of 2012?

DO: We’re a touring band. We don’t have any exact plans but we just know that
we’re gonna do Warped Tour. We’re talking about doing a few overseas festivals are the end of the summer. Just keep on the road, that’s what we do.

DS: Alright, that’s it. Thanks!

Hey!! You can read the rest of the interview here! We talk about everything from Dan’s obsession with Apple products to the band’s lack of beef with Set Your Goals!!

And you can see all of the pictures from the show here!