For 4 days every August, 20,000 punks descend on the city of Blackpool in North West England for Rebellion Festival. Now in it’s 22nd year (in various forms) the festival has been one of the most important in Europe for quite a while. This year sees headlines including Bad Religion, The Skids, Slaves, Sham 69 and Pennywise.

Below is our writer Mike’s tips on who he will be seeing across the 4 days. The full line-up is up now; Tickets are still on sale.

Ahhh, the annual pilgrimage to that most British of holiday resorts, Blackpool. It’s absolutely impossible to do the place justice via the humble medium of the written word, so here’s a picture of it and some Blackpool donkeys. 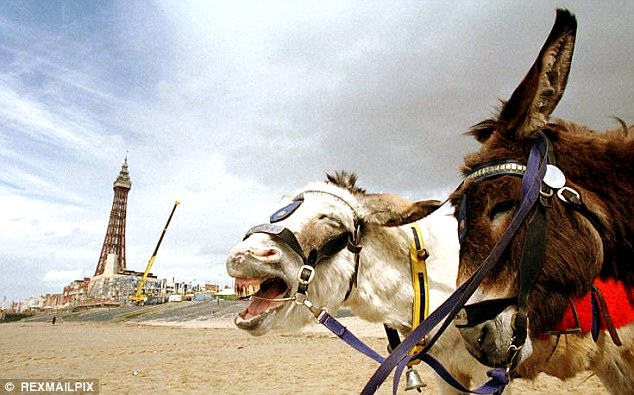 You will get to stay in one of the vast network of B & Bs and hotels that range from half decent to barely better than sleeping on the back seats of your car, unless you leave it until the last minute – and then you’ll get to share a urine soaked bathroom with 8 other rooms and sleep on a worryingly stained mattress until you actually do go and sleep in your car.

Here is my planned itinerary for the 4 days…

Traditionally the Thursday was always half full and the stages were filled with bands most people were less bothered about missing. Even I have been guilty (in the distant past) of saving on holiday days from work and turning up Thursday night. Not these days – if anything, this looks like it’s going to be the most packed day for quality talent at this year’s festival. The ones I definitely won’t miss are:

IN EVIL HOUR – 3:35pm – 4:15pm, Empress Ballroom
Having caught some of Traits’ set (members of Random Hand and The Human Project’s new band) on the new band stage, i’ll be sprinting over to the main stage to watch In Evil Hour, North East England’s political skate punk exports. Now a bit of an institution at the festival, they’re well worth a few minutes of your time between trips outside to down a few cans of Stella to avoid paying £5 instead for a warm Fosters.

Meandering round, checking 88 Fingers Louie, Face to Face and others then will occur before…

PENNYWISE – 10:00pm – 11:00pm, Empress Ballroom
I’m biased as fuck, because they’re the best band of all time, so I was pretty gutted to see that they actually clash with Good Riddance on the second stage (some poor planning there…). But I wouldn’t miss the ‘Wise for the world. They have played the festival once before, back when Zoli was vocalist, but he was ill and some random dude did a sterling job on vocals. This time, they’ve got the first team out and it’s going to fucking slay. Then, no-one even needs to move, because straight after is…

BAD RELIGION – 11:30pm – 12:30pm, Empress Ballroom
Like I even need to sell Bad Religion. You know the drill. You’re going to get drunk and cry when “Sorrow” moves you beyond all words. Or I am, at least.

Doubtless after a brief swim in the freezing, dirty looking Blackpool sea and a portion of chips from the pier (not going to get away with calling them fries round these parts), a trip back into the vast Winter Gardens venue will see me head over to…

I’ve never seen The Svetlanas live, so I’m quite excited. Not only do they offer up some really clinical, old-school street punk, but I can only imagine vocalist Olga is ten times more intense live than she is in their various videos I’ve seen on YouTube. I’m rather excited…

After that, there’s a spring over to the Almost Acoustic stage to watch Alex from Wonk Unit offer up his usual blend of nonsense poetry and tongue in cheek tales of London life – and a cheeky watch of MDC, before…

The Real McKenzies don’t do a great many shows in England – naturally, their UK tours are usually London and 28 shows in Scotland. It’s always a pleasure to see a really top quality bagpipes solo – and a few ageing bare arses underneath some sweaty kilts. Always brutally tight and the kind of energy blokes of that age just should not have, I’m sure the McKenzies will blow my tiny mind.

A really big slot for South London’s DIY punks done good is exactly what they deserve. Years of touring, years of sound development has made Wonk Unit a band that pretty much don’t sound like anyone else, whilst sounding exactly like everyone else. They’ll be playing songs from their recent ‘Mr Splashy’ album, which has some of the catchiest tracks and nonsense I’ve heard in a long time. They’ll be warming the stage up for their mates Slaves, before everyone descends on that one hotel who will happily serve anyone, regardless of whether they’re actually staying there – and won’t close until 7am.

By Saturday, you can see the livers of the majority of participants enlarged and pertruding underneath Hard Skin t-shirts around the complex. Everyone has the best intention to get up for that 11.45am set their mate is playing, but noone manages to make it. Everyone meanders to the acoustic stage for a while and several hundred heads are cradled in several hundred pairs of hands. One super keen straight-edge kid tells everyone how stupid they are, before being told to politely fuck off.

The world will seem ok again by this time though…

It’s probably not a popular point of view, but give me Citizen Fish any day of the week above their big brother, Subhumans. Dick Lucas’s ska punk mob are always a decent watch and are the perfect mid-afternoon remedy to sleep deprivation and headaches from Buckfast over-indulgence.

At all costs I then avoid watching Anti-Nowhere League, before heading over to the Casbah and settling down watch the pleasure that is…

An absolute institution of the festival, Neville Staple plays every year, I’m sure of it. But that doesn’t matter – he’s infectiously keen to be there, even if you’ve never been a fan, his between-song banter alone is absolutely priceless. You know what you’re going to get from The Specials man – and you can guarantee too he’ll claim to be one of the oldest people at the festival, whereas actually he’s still 43 years younger than the bloke from the UK Subs.

Without even moving (unless you need a piss – which, by the way, is much less harrowing than at most festivals, with indoor toilets that are actually cleaned regularly) you can then watch Ruts DC. Which, you know, is going to be amazing. 2 and a half hours of ska, two tone and ska and two tone infused punk rock is pretty much what anyone needs by the time you’re 60 hours into a festival where you’ve slept for about 6 hours of that.

There will then some time for Sham 69 – and The Vapors to play “Turning Japanese” and a whole rest of a set of songs I won’t pretend I’ve heard – before someone tries to sell me some Tramadol and I spend the last of my money on warm gin.

There’ll be no better way to start Sunday than watching Glasgow’s finest early 80s anarcho-punks Ex-Cathedra, playing a lightening quick 40 minute set before heading over to the Arena for…

FAINTEST IDEA – 3:40pm – 4:15pm, Arena
The grand old days of the early and mid 2000s, when you couldn’t move for awesome UK ska-punk and skacore bands, is but a distant memory. But Faintest Idea are still flying the flag. The last time I watched them they were something to behold and I don’t doubt they’ll get a few more converts this year at Rebellion.

Various other bands are on throughout the day that’ll be worth a cheeky look – Last Resort, Abrasive Wheels, maybe even a bit of Richie Ramone, but what matters is that the weekend finishes off with…

With 98% of the festival off to watch The Skids, I’ll be settling down to an hour in the company of Canada’s finest puveyors of reflective melodic hardcore, knowing that they won’t possibly be able to fit even half of the bangers from their back catalogue in the set – especially with the amount of crap they talk between songs.

So there you have it – a non-exhaustive list of bands that I recommend for the festival. Even if none of these tickle your fancy, there are over 150 bands playing and the great thing is they book everyone from legendary acts to bands from down the road. If you haven’t been, give it some thought…