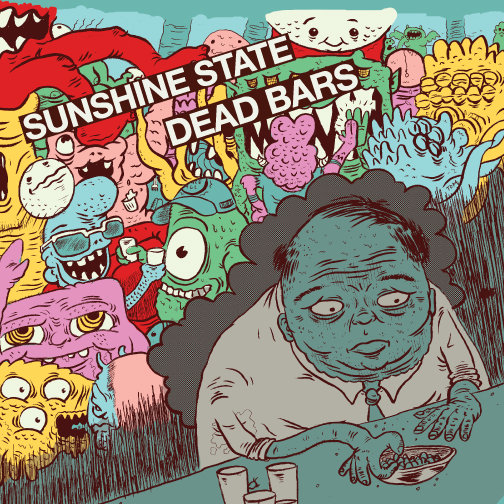 I’ve been enjoying the textural experience a piece of grooved vinyl has to offer more than usual lately. The split has, by luck and generosity, been my focus for the last week, and in this time I’ve come to love its variety and short-form concept. Its a beautiful and uniquely punk rock medium for music delivery. The latest to spin is Sunshine State and Dead Bars’ split from No Idea, an exemplary split with two bands I’m already eager to hear more from.

Warren Oakes was my favorite Against Me! drummer. I loved the backbeat of the danceable, almost disco-y fun that he provided in the band’s golden age. For me, it was his departure that sent the band caterwauling down a path marred with flat tones and bored instrumentation. But Warren Oakes is but one man. He was a piece of the puzzle that completed a picture that I rather liked, but he wasn’t the driving force. When he left, they were still Against Me!, they just re-cut their edges and found a new piece that would fit.

Sunshine State is a new puzzle that claims Warren as a piece. Its punk rock with a bit of a power pop bent, but it doesn’t stray too far away from the Gainesville Sound. I like it a lot, and I guess I should kick myself for being surprised. Its hard to shake the previous associations that a band member can carry with them. Without ever listening to them, Sunshine State could have very well been “that band with Warren Oakes” and never anything more. That would’ve been a shame.

Both bands succeed by putting forth great songs and not treating the release as a throwaway for completists. “Lunchblood,” from Sunshine State’s half of the split is a catchy mid-tempo anthem about not being an asshole. It reminds me of some of Jawbreaker’s more outwardly melodic tunes, with the same cutting, heart-on-the-sleeve honesty that has come to be one of punk rock’s defining features. “Long in the Tooth” is darker sounding, and more aggressive. It consists of a handful of lyrics that repeat, but never actually feels repetitive. This is due to the dynamic musical content, where raunchy power chords give way to an emo breakdown mid-song, and new layers of instrumentation give new urgency to repeated words.

Since discovering their self-titled EP, Dead Bars have become one of my favorite bands. They’re loud and brash and instantly relatable, playing their brand of pop punk with vocals bellowed at the edge of hoarseness. Their songs on this split are great, and give me a feeling that we’re going to see a lot more of these guys in the future.

“Just Fine,” is a goddamn anthem. It perfectly captures being poor and punk and living in a world where neither of those things are met with empathy or enthusiasm. There’s a line in there that resonates particularly well: “I told these girls about my band. And they didn’t understand. “How can you be in a band if you don’t play any shows?” So I tuned my guitar to Drop D, and I wrote my own songs, so that I can sing along in my room.” It appeals to every punk who has needed to let loose with a scream and strum in a world that doesn’t always get it.

Both Dead Bars and Sunshine State nail their entries on this split. In a previous review, I compared the release from Big Eyes and Post Teens to a beach party and its dirtier after party. To stretch the metaphor to another No Idea records split, I’d say this is where everyone goes home. Drunk, tired, and strung out from a night of debauchery. They leave separately and think about the money they spent, their work in the morning, and what they’re doing with their life. Before they fall asleep, they have one more beer, and put on a record to hear the words they speak in passing given life through music. This is punk rock for the grown-ups who just started suspecting they’re not kids anymore.