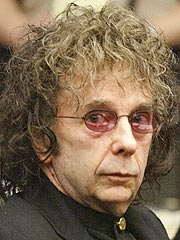 File this terrifying piece of trivia under “insanity,” people.

The idea of producer/hit musician Phil Spector teaming up with The Ramones to produce their 1980 album “End Of The Century” at first seemed like the meeting of great minds, but as it turned out, the group ended up being far from a happy family. Red lights went up immediately; reportedly Spector was extremely obsessive in the studio, making Johnny play the opening chord of “Rock ‘n’ Roll High School” for eight hours straight. “Phil would sit in the control room and would listen through the headphones to Marky hit one note on the drum, hour after hour, after hour, after hour,” wrote bassist Dee Dee Ramone.

But Spector was just getting started on the road to being a total psycho. He later took Joey away for a 3-hour private meeting somewhere in his mansion, and Dee Dee went looking for him. I’ll just let him explain it in his own words:

“The next thing I knew Phil appeared at the top of the staircase, shouting and waving a pistol. “Phil,” I challenged him, “I don’t know what your fucking problem is, waving that pistol around and all that stuff…. I’ve had it. I’m going back to the Tropicana.”

“He leveled his gun at my heart and then motioned for me and the rest of the band to get back in the piano room…. He only holstered his pistol when he felt secure that his bodyguards could take over. Then he sat down at his black concert piano and made us listen to him play and sing “Baby, I Love You” until well after 4:30 in the morning.”

What a guy. Has anybody thought to make a Die Hard movie with that plot? Spector never really cleaned up his act, and has been serving 19 years to life in California for the murder of actress Lana Clarkson.

“So yeah, he locked us in his house for hours, and he pulled a gun on Dee Dee. But it was a positive learning experience. And that chord does sound really good.”

Um, whatever you say, Joey…