Search Results for "The Gaslight Anthem"

New Jersey’s The Gaslight Anthem have released a special edition of their 2008 album The 59 Sound to commemorate its 10th anniversary.  The new The 59 Sound Sessions includes previously unheard versions of some of the tracks, a 60 page photo book, some unreleased material and a cover of “God’s Gonna Cut You Down” by Johnny Cash.

You can give it a listen below.

This edition of The 59 Sounds was released on June 15th via Side One Dummy Records.

The Gaslight Anthem to release special edition of “The 59 Sound”

New Jersey’s The Gaslight Anthem will be releasing a special edition of their 2008 album The 59 Sound to commemorate its 10th anniversary. It will be titled The 59 Sound Sessions and will include previously unheard versions of some of the tracks, a 60 page photo book, some unreleased material and a cover of “God’s Gonna Cut You Down” by Johnny Cash.

The special edition will be released on June 15 via Side One Dummy Records.

The Gaslight Anthem have announced a tour in June/July to perform ‘The ’59 Sound’ in its entirety, celebrating the album’s 10th anniversary. The tour sees the band perform in North America, UK and Europe.

A full list of dates so far is up on the band’s website, with pre-orders tomorrow and normal release this Friday (2nd February).

The Gastlight Anthem frontman Brian Fallon is streaming another song off his upcoming solo album Sleepwalkers. The track’s called “My Name Is The Night (Color Me Black)”, and you can check it out below.

Sleepwalkers is set to release on February 9th, 2018 through Island Records. Fallon will be supporting the album with European and US tours. 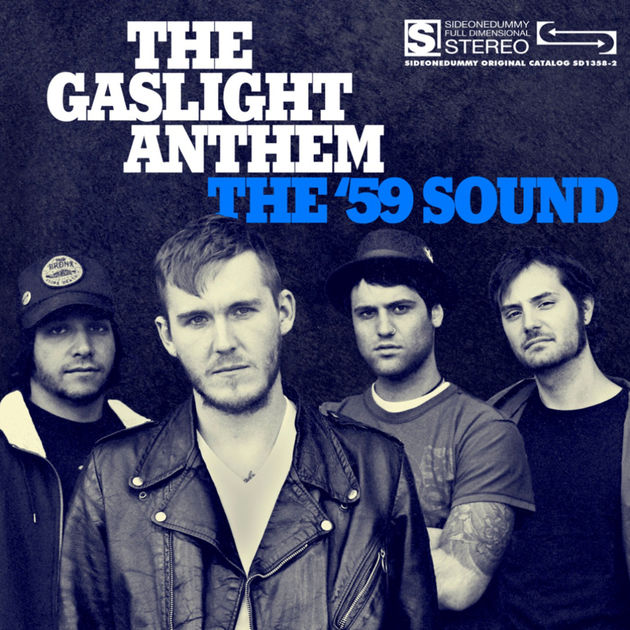 The Gaslight Anthem have been on a slight hiatus for a few years, but have just announced they will be returning to the stage for the Governors Ball in New York City from June 1-3.

For a special celebration of their hit album The ’59 Sound‘s tenth birthday, the boys will be returning to the spotlight.

The Gastlight Anthem frontman Brian Fallon premiered another song off his upcoming album Sleepwalkers. You can listen to “If Your Prayers Don’t Get to Heaven” below.

Sleepwalkers is set to release on February 9th, 2018 through Island Records. Fallon will be supporting the album with European and US tours next year.

New Jersey melodic hardcore band Bottomfeeder (ft. members of The Gaslight Anthem, Let Me Run & more) are streaming a new song titled “Flux Capacitor.” Give the track a listen below.

The song is taken from the bands’ upcoming EP Sink To The Depths, which is set to be released on September 22nd through Good Fight Music.

Brian Fallon of The Gaslight Anthem has released a new music video for his song “Nobody Wins,” and you can check it out below.

The track is taken from Fallon’s debut solo album Painkillers, which is set to release on March 11th through Island Records.

SideOneDummy records have announced reductions on all things Brian Fallon this week with everything related to The Gaslight Anthem/The Horrible Crowes enjoying reductions. The merch sale comes just over a month before the expected release date  Fallon’s solo album “Painkillers” and is a generous way to help promote the artist.

You can check out the selection here.

Brian Fallon (Who you probably know from The Gaslight Anthem, The Horrible Crowes, and/or Molly and the Zombies) has released some details regarding his upcoming solo LP, Painkillers. You can check out the album art, the track list, and a clip from a new song titled “Nobody Wins” below.

Fallon also launched pre-order bundles for Painkillers, all of which you can find here. He previously released a stream of a new song titled “A Wonderful Life,” which you can listen to here.

Painkillers will be released on March 11, 2016 through Island Records.

It’s been a scant four months since New Jersey’s The Gaslight Anthem announced that they’d played their last shows for the time being and would thus begin a disappointing-yet-not-entirely-unexpected indefinite hiatus. If you’re at all familiar with the occasional stir-crazy, restless nature of the band’s frontman, Brian Fallon, however, you probably assumed you wouldn’t have to wait all that long before his voice would pop up again. Still, four months seems awfully quick…

And yet, here we are, not two full weeks into 2016 and we’re not only on the doorstep of Fallon’s first true solo album, Painkillers, (due out in March 11th on Island Records), but right at the beginning of what’s shaping up to be a fairly lengthy tour in support of his new project, Brian Fallon and The Crowes, an obvious play on the name of the Horrible Crowes side project Fallon started with Gaslight’s guitar tech-turned-touring-guitarist Ian Perkins a few years back. The third night of said tour found itself in the historic Fox Theater (if a 23-year-old theater can be historic, this one is, at least according to the baby-faced bouncer guarding the stage left area. But seriously, though, Frank Sinatra did open the place, so that counts for something…) at Foxwoods Resort Casino in rural Connecticut.

The setting is admittedly a bit of a strange one when compared to the sweaty punk clubs that The Gaslight Anthem cut their early teeth on, or even some of the larger venues the band played in more recent years. To try to paint a brief picture, envision a glorified high school auditorium (cap. 1400), but with pristine sound and lighting and immaculate carpets and movie theater seats. Now envision that false, brick-and-mortar facade of that auditorium exists across the high-end mall hallway from a Fuddruckers burger joint and acres of one-armed bandits flashing and sirening in total sensory overload cacophony, and that’s about what you’ve got. Strange place for a group of on-the-other-side-of-thirty lapsed punkers to convene, but I digress.

From the moment that Fallon and his five-piece band (Perkins on guitar, fellow Gaslighters Alex Rosamilia on keys and guitar, The Scandals‘ Jared Hart primarily on acoustic 12-string, the inimitable Cat Popper on bass, and Wes Kleinknecht on drums) hit the stage and fired up the opening track “Red Lights,” which those of you familiar with Fallon/Popper’s Molly And The Zombies project will no-doubt remember, the evening had a special sort of a feel. At no point in what realistically could have been a marathon of a nineteen-song setlist did showgoers really get the sense that this band had only played two collective shows together in their history.

Fallon’s stage banter was its typical jovial, off-the-cuff self, which helped provide a little levity to a setlist that included, at times, some fairly dark themes, particularly those surrounding lost love. It has become rather taboo in some circles to premier music before an album’s release in this YouTube era, yet Fallon and the gang played all dozen of the tracks slated to appear on Painkillers in bold fashion. The audience, comprised largely of visible (and at times vocal) Gaslight Anthem fans, were noticeably polite and respectful for the duration of the set, eager to grasp the new stories that Fallon had to share. Aside from the lead single, “A Wonderful Life,” the general feeling is a bit mid-tempo, a more layered, at times alt-country bookend to the smokier, blusier The Horrible Crowes Elsie full-length (from which about a half-dozen tracks were performed here). While it obviously remains to be seen what happens to The Gaslight Anthem going forward, fans of Fallon’s songwriting and storytelling have little to fear, as The Crowes are the real deal.

Cory Branan provided direct support on this evening, as he will for the band’s entire first tour out of the chute. Having seen Branan play sweaty basement clubs and backroom bars in the past, this setting had a much different vibe, but one that really highlighted Branan’s role as an artist and a storyteller. Perhaps it was the seated nature of the show, but gone was the occasional need for an acoustic performer to battle to pull in listeners from above the din of the vocally inattentive bar patrons, allowing instead for the humor and wit that pepper Branan’s lyrics (not to mention his criminally-underrated guitar playing) to really shine. He’ll be back in this neck of the woods next month with Chuck Ragan; go see him, damnit!

Check out our full photo gallery from the rather stellar evening below.

Brian Fallon (You know, the frontman of The Gaslight Anthem, The Horrible Crowes, and Molly and the Zombies) has released a stream a new song titled “A Wonderful Life.” The song is the first single released from Fallon’s highly anticipated solo LP, Painkillers. Backing Fallon on this track are Molly and the Zombies bassist Catherine Popper, Mark Zepro (Ben Kweller Band) on drums, and Butch Walker (who also acted as producer) on guitar.

You can give “A Wonderful Life” a listen here.

Painkillers will be released on March 11, 2016 through Island Records.

As you may have heard, Brian Fallon (You know, the frontman of The Gaslight Anthem, The Horrible Crowes, and Molly and the Zombies) has a solo LP, Painkillers, in the works. Fallon recently sat down with Kerrang and revealed a few details on the project, including who played on the album and what kinds of sounds to expect on the album:

“It’s tough to use words to describe music, but everything starts out with drums, bass and an acoustic guitar. […] I’m kind of tapping into my upbringing early on with American folk music and American rock’n’roll music from before the ‘70s – before rock became like, ‘ROCK AND ROLL!’ It’s song-based, really.”

You can read the full interview here.

The Gaslight Anthem announced over the summer that theywill be going on an indefinite hiatus, but if you still want to get your fill of Fallon’s soulful melodies, you can catch him on tour through the month of January; dates are here.

Brian Fallon, the (former?) frontman of The Gaslight Anthem, has announced a solo LP in the works! The LP is called “Painkillers” and is set to drop sometime in early 2016; we will keep you posted.

Though this is Fallon’s first solo project, it is not his first side project. He has spent some time touring with The Horrible Crowes and Molly & The Zombies in recent years.

The Gaslight Anthem announced over the summer that they will be going on an indefinite hiatus following their latest European tour, but if you still want to get your fill of melodic punk you can catch Brian Fallon on tour through the month of January; dates are below.

Brian Fallon (The Gaslight Anthem) at House of Blues – Boston

According to the latest post on Brian Fallon’s recently rekindled Instagram account, the (former?) Gaslight Anthem frontman is hard at work demoing material for what will apparently become his debut solo album.

Fans of the band will recall that TGA recently announced an indefinite hiatus that went into effect upon completion of their latest European tour. Fans with particularly long memories will recall that Fallon has previously announced plans to work on a solo release, only to regroup his Gaslight compadres. Something tells us this one will come to fruition, though. Stay tuned!